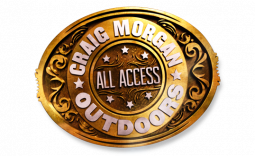 Morgans dynamic personality, lifelong love of the outdoors and considerable television experience make Craig Morgan: All Access Outdoors a must-see for outdoor enthusiasts and music fans alike. Adventures in the eighth season include travels to Kodiak Island for a big Sitka Black-tailed deer, a special hunt in Texas where Craig hosts a veteran from each branch of the United States military, a trip to south Florida to chase Oceola Turkey, and more memories made with NFL star Tyler Eifert, his daughter Aly and wife Karen. Craig has also created a very special episode featuring some of his favorite hunting memories with his son, Jerry.

The 13-episode season of his award-winning show will premiere in a primetime slot on Friday, June 30 at 7 pm EST on Outdoor Channel with repeat airings on Friday and Sunday.

Craig is an important part of our Big-Country Friday line-up; every week viewers get a window into the world of one of the hardest working artists in country music both on the road and in field said Outdoor Channel Vice President of Programming, Mitch Petrie.

Check local listings or visit www.OutdoorChannel.com/ChannelFinder to find out how to get the network in your area.

Declared a mature record that, while not afraid to have a little fun, values poignancy over pop country, (Rolling Stone Country) Morgans newest album A Whole Lot More To Me is available now. Hell also reprise his inventive Operation FINALLY HOME Welcomes American Stories Tour with Craig Morgan and very special guests this fall with tickets available now at CraigMorgan.com.

About Craig Morgan: A multi-faceted entertainer, Craig Morgan has made a name for himself as a country music icon, TV host, celebrated outdoorsman and patriotic Army veteran. One of country music's best-loved artists, Morgan thrills massive crowds with signature hits, including Bonfire, Almost Home, Redneck Yacht Club, International Harvester, This Ole Boy, Wake Up Loving You and the six week #1, That's What I Love About Sunday. His newest album, A Whole Lot More To Me, released in June 2016, features singles Ill Be Home Soon and When Im Gone.

Craig received one of country music's highest honors when he was inducted as a member of the Grand Ole Opry in 2008. In addition to a prolific country music career, he hosts the award-winning TV show Craig Morgan: All Access Outdoors, approaching its eighth season on Outdoor Channel. Prior to becoming a country music star and TV sensation, Morgan spent seventeen years serving our country in the Army and Army Reserves. He is an avid supporter of America's military personnel and a recipient of the 2006 USO Merit Award.