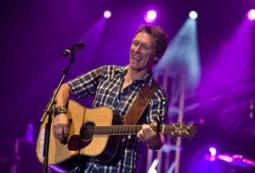 Craig Morgan spent nearly 17 years in uniform, but it's what he's done for Fort Bragg troops since that's earning him his latest award.

Morgan, soldier turned country music star, will receive the USO of North Carolina's Heart of a Warrior award at the organization's annual Salute to Freedom Gala on Oct. 3.

The award is given to "those who continuously lift the spirits of troops and their families," officials said.

"Morgan has done that many, many times with selfless service and contributions," the USO of North Carolina said.

"We're honored to have someone with Craig's talent give so generously of his time to the men and women of the U.S. Armed Forces," John Falkenbury, president of the USO of North Carolina, said in a release.

The singer-songwriter, whose real last name is Greer, is no stranger to Fort Bragg.

He served with the 82nd Airborne Division during a military career that included more than nine years on active duty and another six-plus years in the Army Reserve.

Morgan has said he ended his Army career in hopes of becoming a music star.

Before a performance on what was then Pope Air Force Base in September 2010, he told the Observer he left the military but didn't sever the connections with the troops or their families.

"I feel lucky just to be performing for them," he said at the time. "Heck, when I first left the Army to be a country singer, I thought I'd have to go right back. I know that any day now all of this could be over, so I try to give back whenever I can."

Before that 2010 concert, Morgan jumped with former members of the Army Parachute Team, the Golden Knights, near Fort Bragg.

He then performed the free event before an audience of 15,000.

In 2013, Morgan returned to Fort Bragg to participate in the Jack Daniel's/USO Toast to the Troops.

The event brought together about 200 volunteers to assemble more than 4,000 care packages for local troops, with Morgan punctuating the effort with a free concert.

Morgan's hits include "Bonfire," "Almost Home," "Redneck Yacht Club," "International Harvester," "This Ole Boy," "Wake Up Lovin' You" and "That's What I Love About Sunday."

He will be honored during the Salute to Freedom Gala at the Sheraton Imperial in Durham.