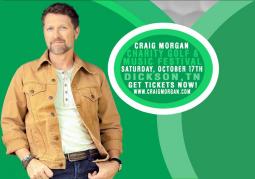 Craig will host his 9th Annual Charity Event benefitting the Dickson County Craig Morgan Foundation on October 17 in Dickson, Tennessee! Known for his high-flying skills on the motocross tracks, the country music star and award-winning TV host will go green in 2015, starting with a golf tournament at Greystone Golf Course, followed by a family-friendly festival from the city’s War Memorial Lawn, and capped with a memorable concert with Craig Morgan and friends. Tickets are on sale now here! Additional details and participants for the October 17 events will be announced in the coming weeks.